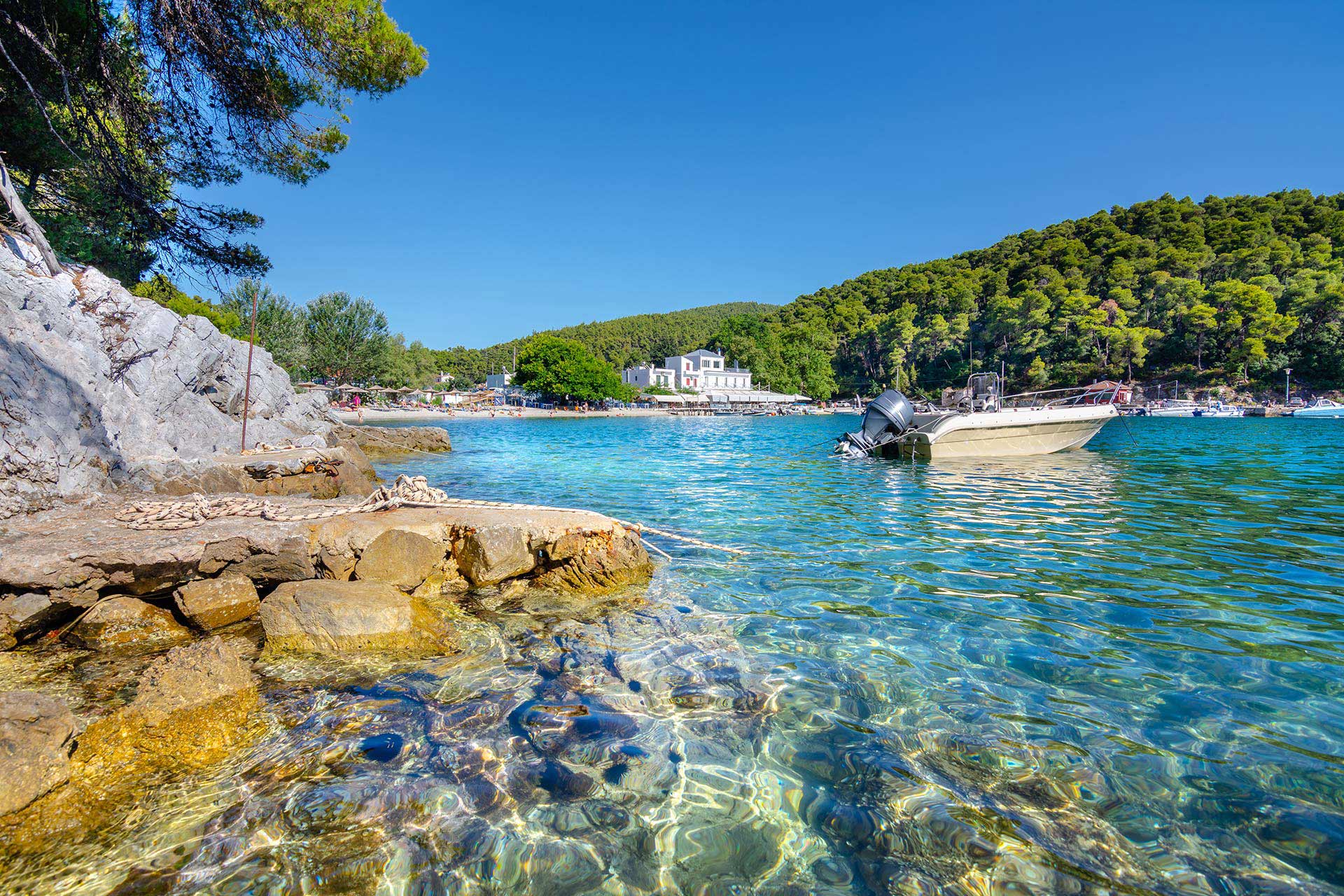 Discovering the Island of Skopelos

I am not sure if there are many people that haven’t seen the original 2008 Mamma Mia film with Meryl Streep and Piers Brosnan. It conjures up thoughts of a dreamy Greek island with a romantic ending. Any die hard fans will know that the stunning location for the film were two of the Northern Sporades islands Skiathos but really mostly the outside scenes were filmed on location on Skopelos island. When you visit you will see the reason that this island was chosen; this island is unspoilt, genuine and is filled with beautiful Greek nature.

Many travellers and holiday makers dream about island hopping in Greece. It conjures up ideas of a simpler time when technology and the fast pace of general living wasn’t even thought of.

There are many island groups in Greece and for longer trips you may find yourself travelling between these island groups but for a shorter ‘holiday’ trip it's a good idea to remain loyal to one ‘family’ group of islands which will give you time to experience the differences in islands closer together. One such ‘family’ group of islands is the Northern Sporades Islands. Instead of just visiting one island you might consider visiting a family!

The Northern Sporades islands are all quite different but a joy to discover as a group and separately. The beaches have an undiscovered feel to them and each one is different with sandy stretches, pebbly coves, pine fringed with winding paths and tracks making each one a discovery in itself.

Skiathos is the island with an international airport. The landing and takeoff from Alexandros Papadiamantis airport in Skiathos is much photographed, coming in and departing over the sea. The airport makes Skiathos the most cosmopolitan of the islands with over 70 beaches, mostly sandy, and an easy bus route across the island, it has a trendy and thriving port. You can spend hours just wandering through the atmospheric streets in Skiathos town marvelling at the tiny Greek properties and catching sea glimpses all along the way.

A ferry or water taxi will take you from the quayside in Skiathos town to the verdant island of Skopelos. Much quieter than its sister, Skiathos, but a place where very special memories can be made. I often liken it to Cornwall before Cornwall was ‘discovered’! The island is much quieter overall but during the months of July or August you will find lots of international visitors boosting the population and breathing life into the summer experience of this stunning Greek island. In Skopelos town you can find shops run by artisans, family tavernas and cafes. It’s always fun to hire a moped and go and discover ‘your Skopelos’. With the island only being 21km by 8 km you will be sure to make wonderful memories.

The admirers of the movie Mamma Mia are going to love exploring this alluring island, starting from Kastani beach and the chapel of Agios Ioannis of Kastri with 110 steps up to the door … in the film it was portrayed that a donkey climbed the steps … when you get there you will see the magic of film!  Another fabulous beach that is worth visiting and considered by many people as one of the best beaches on the island is Milia beach, surrounded by pines and covered with tiny white pebbles. Just along the way is Panormos beach, with its unusual dark blue waters and the long windless bay, is maybe the most famous one.  In this bay and at one of the most beautiful locations on the island you will find The Ionisi, offering boutique accommodation, a beachside pool, restaurant and beach bar.

The geography of Skopelos always surprises visitors with so many beaches and coves around the island many only accessible from the water… a great excuse to set sail. More than 50% of the area of Skopelos is covered with a virgin pine forest which in 1997 was was proclaimed the ‘Green and Blue island’ by the International Organisation of Biopolitics and is now a preserved area due to the pine trees and the clear unusually blue waters of the island.

We would be delighted to tell you more about The Ionisi and the island of Skopelos and to welcome everyone to experience a dreamy vacation on one of the most special undiscovered Greek islands!